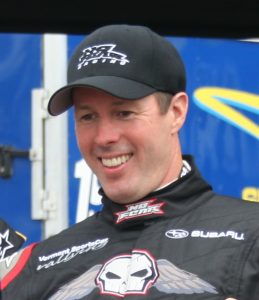 Colin McRae, MBE, youngest ever World Rally Champion and winner of 25 career victories, was tragically killed 10 years ago in a helicopter accident.

If in doubt, go flat out!

It’s hard to believe that it’s a landmark 10 years ago today, September 15th, that one of Britain’s best-loved rally drivers, Colin McRae, was tragically killed in a helicopter crash which also claimed the lives of his 5-year old son, Johnny, and two family friends near his home in Lanarkshire. At the age of 39, McRae’s loss was horrendous on so many levels; to his family, his fans and the many people whose lives he touched.

One of the highlights of my journalistic career was interviewing the 1995 World Rally Champion in July 2002. McRae was in Ireland competing in the Punchestown World Rally Experience and I was one of the lucky few journos given access to interview him that weekend. McRae arrived in Dublin on the back of his 25th – and last – world rally victory on the Safari event in Kenya in the Ford Focus WRC, and he was very relaxed. Colin had always appeared quite serious to me but during the interview, which I will treasure forever, I found Colin to be very funny, quite charming and not at all what I expected.

At the time, I was also becoming recognised in Ireland as a sports mind coach, particularly with rally and racing drivers and many of them were getting some impressive results. Although the interview I did with McRae was fairly generalised and was for an Irish magazine, Autowoman, I was very interested in how his mind ticked as a driver behind the wheel and some of my questions were geared towards his mental approach, and his totally innate ability to drive fast. There was no suggestion that he’d had any formal sports psychology coaching.

McRae replied as follows: “The enjoyment you get out of it is the finish; that’s what you aim for. You work hard for a few days to get a result at the end of it and that’s where you get the enjoyment.

“It requires a lot of self-discipline for sure, and it’s something you develop with experience. You have to really concentrate on concentrating, if you like, and it’s not something that comes easily. It depends what else is on your mind. If you have a problem, as soon as it’s happened you have to make a conscious effort to shut it out and concentrate on the job in hand.

“If you have some really long sections on a stage, like on the Safari Rally, when you don’t actually have to concentrate that hard and you have to keep the car going along 500-metre long straights, that’s when your concentration can start to wander a bit.

“On most events you get information coming at you every second from your co-driver, so that never happens and it’s easier to stay in the flow, but on the Safari Rally there might be half a dozen times when you have a break for 30 seconds or more between being given information.

“If you have any self-doubt you’re on a slippery slope, and if you think about an accident or you’ve a bad run, it’s an awful lot harder to get back on top again but the ability to do that is very important.”

Wise words and good advice from a well-loved and naturally gifted champion we will never forget.

Ninja Avocado
As a holistic health practitioner with the understanding that mind, body and spirit are inextricably interlinked, one company I’m delighted to recommend is Ninja Avocado. Check it out now...
Testimonials
Linda was non-judgmental and so easy to talk to. I felt completely at ease with her
instantly and so relaxed from our very first meeting. She helped me look at myself in
a much more positive light.